In the summer of 1994, the petrochemical worker Gabriele Bortolozzo – employed for decades in Porto Marghera’s VCM-PVC plants – met Public Prosecutor Felice Casson in his office at the Court of Venice. Bortolozzo, supported by the association Medicina Democratica, was there to submit a complaint against the Italian companies Montedison and Enichem over the deaths by cancer of scores of his colleagues and the severe contamination of the Venice lagoon (see Bortolozzo, 1998). For Casson, this encounter meant the beginning of a global journey – recounted in the book La fabbrica dei veleni (Casson, 2007) – to investigate the history of knowledge about toxicity related to VCM-PVC production, an expertise mostly held by the industry itself (see also Markovitz and Rosner, 2002). This would result in one of the highest-profile environmental court cases in the history of Italy. 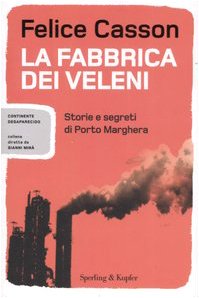 Casson’s investigations brought him to some key hubs of global petrochemical production, past and present. Starting from Italy, the judge collected information on the other sites owned by ENI where workers and residents suffered severe health damage due to industry-related toxicity and its effects on the environment, particularly in Gela, Manfredonia, Porto Torres, Ravenna, and Siracusa.

In Lake Charles, Louisiana – a town considered to be the PVC capital of the United States – Casson visited the archives of Billy Baggett Jr., a lawyer specialised in court cases over VCM-related deaths. It was in fact in the United States, in 1974, that VCM’s carcinogenetic nature became public, after it was discovered that around ten employees of Goodrich’s Louisville plant died by angiosarcoma of the liver, a very rare cancer.

Casson also learnt that petrochemical workers employed by Dynamit Nobel in Troisdorf, in the German Rhine-Westphalia region, had protested about health damage, including sex disorders, caused by VCM. He found out that, in 1973, a group of Montedison managers had visited the BASF complex in Ludwigshafen to discuss the existing understandings of VCM’s toxicity, including research carried out by the Italian doctors Pier Luigi Viola and Cesare Maltoni, who had demonstrated the causal relation between exposure to VCM and liver cancer.

Looking for more data, Casson contacted the Italian diplomacy in South Africa to enquire about the existence of research on the toxicity of VCM there. He also visited a VCM-PVC plant in Suzhou, not far from Shanghai, and met Chinese government officers in Beijing to learn about the information that they held on the health effects of VCM. A chapter of the book is dedicated to the Bhopal tragedy, the world’s worst industrial disaster, in which many thousands lost their life due to a major accident at Union Carbide’s fertilisers plant in the Indian city.

Casson’s quest also led him to Great Britain, where he interrogated Brian Bennett, a doctor employed by Imperial Chemical Industries (ICI) who was tasked with keeping a confidential record of deaths by angiosarcoma of the liver. In a surreal turn of events, Montedison’s lawyers had declared during the trial that Dr Bennett had recently deceased, and thus could not offer any evidence. Yet he was soon found to be alive and well in Southampton. Cases of deaths by angiosarcoma included workers employed in ICI’s VCM-PVC plants in Blackpool, as well as at least one local resident.

What emerges from Casson’s investigation is a global map of petrochemical production, where the dots are connected between the struggles of workers and residents against industry-related toxicity and pollution across the world. This is in a way similar to what the Toxic Expertise team has done in creating The Global Petrochemical Map, which went live in July 2019. As detailed in the last Toxic News issue, the Map contains a series of reports (75 at the moment, more to come) on petrochemical complexes all over the world, providing information on their history and industrial profiles, the fenceline communities living in their vicinities, the safety and environmental records of their industries, community mobilisations and industrial disputes. As you can see by clicking on the hyperlinks embedded above, many of the petrochemical sites that appear in Casson’s book were also covered in the Map.

The Map aims to make visible the connections among the different nodes of the global petrochemical industry. Yet, in addition to showing connections, it can also be used to create them. In fact, the Map is a participative tool in which anybody related to the industry can upload a report on a petrochemical complex or share personal experiences. Each report includes a list of community organisations who have been active around community-industry relations. It is thus possible for residents of a given fenceline community to use the Map as a tool to know about, or get in touch with, groups of citizens facing similar challenges.

In a similar vein, this Toxic News issue uses the Map to create connections. In fact, it hosts contributions by authors who have been working in different capacities on five of the cases covered by the Map: Asaluyeh (Iran), Bahía Blanca (Argentina), Gela (Italy), Grangemouth (UK) and Ludwigshafen (Germany).

The first contribution is by Peyman Jafari, a postdoctoral research associate at Princeton University and a research fellow at the International Institute of Social History (Amsterdam). Going beyond the conventional foreign policy focus that characterises Western media coverage of the Iranian industry, Peyman shows how the large-scale development of the petrochemical industry in Asaluyeh comes with severe environmental degradation, on the one hand, and highly precarious employment relations, on the other hand.

The second article, by psychologist María Giovis, is the story of how she decided to produce a documentary on the negative impacts that the Bahía Blanca petrochemical industry has had on the town of Ingeniero White, in terms of health problems, environmental degradation, and declining employment opportunities. Our collaboration with María is an example of how the Map can be used to establish international networks. In fact, we became aware of her work when she posted about it in the Map.

Elisa Privitera, a PhD student at the University of Catania, is the author of the third piece, on the Sicilian petrochemical complex of Gela. Based on her research in a community deeply affected by a high incidence of cancers and other diseases, Elisa argues for the importance of ethnographic “small data”, particularly biographic interviews, not just for academic research but also for state regulations on polluting and hazardous industries.

To conclude the series, Peter Phillimore – Professor in social anthropology at Newcastle University – offers a precious reflection on the comparative research on industry-community relations he and his team carried out in Grangemouth and Ludwigshafen in 2001. His findings about citizens’ relatively high confidence in BASF in the German case and increasing distrust towards the industry in the British one are made even more interesting today, by the change in ownership of Grangemouth’s refinery and petrochemical complex. While, in the early 2000s, the Grangemouth community felt uneasy about BP’s restructurings, the Toxic Expertise team has found much nostalgia for the company now that Ineos has taken over its assets there.

In addition, this issue of Toxic News hosts a fascinating contribution by Rajji Desai, a research associate in urban development at Harvard University, on the disposal of space technology waste. Rajji thus takes us outside of the boundaries of our Global Map and back to the depths of the South Pacific Ocean, where the “Spacecraft Cemetery” lies.