As China produces and consumes more and more electrical and electronic equipment, e-waste generation also takes off. Following the old-for-new scheme practiced between 2009 and 2011, China issued its own Waste Electrical and Electronic Equipment Directive in 2012 intended to meet the rising e-waste generation situation. This means a lot for both formal and informal e-waste sectors. E-waste flow after collection by informal sector and diversion of dismantling e-waste to formal e-waste sector has been changing in the following years.

Prior to studying e-waste’s collection, reuse and dismantling, I had followed the scrap collection and recycling in Beijing for years, but I knew little of e-waste sector. I also heard that mainstream academia and government authorities criticized the pollution caused by informal e-waste sector, particularly the infamous centers such as Guiyu, a small town in Guangdong Province. However, e-waste recycling is long chain and processing centers like Guiyu are just one point of the recycling chain.

As I follow the commodity chain of e-waste, I have discovered that informal e-waste sector has contributed greatly to e-waste reuse and resources recovery that China’s e-waste policy makers and academia tend to ignore or stereotype informal e-waste sector as barrier to China’s e-waste recycling.  The informal e-waste collection and processing sector has many problems worth addressing, but makes two major overlooked contributions to the sector.  Firstly, they repair and refurbish a large portion of discarded appliances so they can be reused rather than shredded; secondly, their collection network and sorting of discarded appliances is so efficient that the formal sector companies have largely become dependent on them for their sourcing.

Since the 1980s, after China started its market economy, the recycling business has gradually moved to a market oriented model. This happened at the same time with labor mobilization from countryside to cities. When farmers left their home villages to cities, many chose to take recycling as their jobs, due to the general belief that to collect scraps does not require expertise and big investment. By 2014, there were more than 200,000 people working in informal recycling in Beijing.[1]

After onsite observation and talking with people in e-waste recycling very quickly, I realized that in contrast to the misperception that no expertise was needed, people in the whole chain of e-waste recycling from collection, reuse to resource recovery were all experts on e-waste.

They know exactly what materials in their collected e-waste as they just glance at it. When they know the brand and outlook, they can give the appropriate price to the residents who sell their e-waste to them.

At the collection stage, e-waste and other recyclables are gathered by the same group of scrap collectors. In Beijing, over 90% people who work for scrap collection are from Gushi County, Xinyang Prefecture, Henan Province. They buy e-wastes from residents and transport them to collection sites. Scrap collectors need to be familiar with market changes of e-waste and brokers’ price otherwise they will lose money if they offer higher price to buy during collection. Collectors also need to get along well with residents in communities where the collectors are based, the property management companies and the Residents’ Committees. All this requires the scrap collectors to be knowledgeable in e-waste and to build good community relationships through long-term practices on the ground. 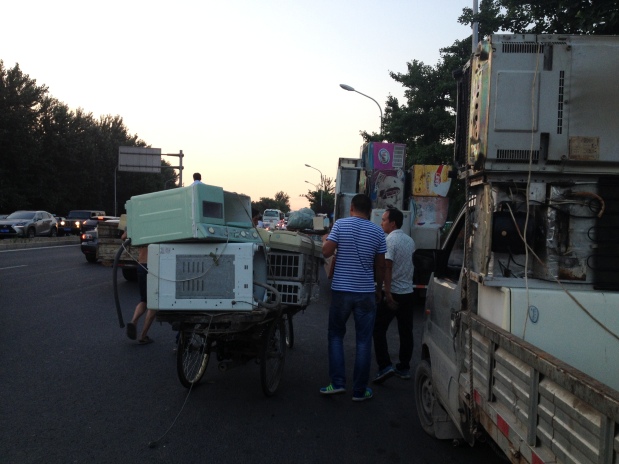 Scrap collectors collect all types of e-waste ranging from bulky items to electronics such as phones and electronic equipment which is not listed as subsidized e-waste recycling.  After the e-waste is collected, the scrap collectors take them to the e-waste trade centers, or the brokers sometimes come to the collection site to buy them. Then e-waste goes to be traded on conventional on-street centers or the yard where the brokers cluster. On-street e-waste trade lasts from around 5pm in late afternoon to 9pm in the evening. During this time, dealers specialize in secondhand or dismantled e-waste come, and customers from the trade centers pick what they need for their business. People who specialize in collecting certain types of secondhand or dismantled items are so familiar with their collection’s market that they would identify and pick up their collection from collectors or brokers very quickly during the trade. All trade is in cash. Therefore, e-waste flows into the hands of two groups of dealers: secondhand and dismantled goods.

Today, more and more e-waste is dismantled, and is not reused as much as in 1990s and early 2000.[2] Among the bulky e-waste, such as washers, refrigerators, TVs, and air conditioners, air conditioners are the mostly reused, around 50%, but for washers and refrigerators, only around 30% goes to secondhand market, and for TVs, particularly CRT TVs, there’s little demand for reuse.[3] Computers are different from others; secondhand and dismantling dealers are the same group of people because some parts of computers can be reused.

When dismantling, e-waste dealers buy their materials from scrap collectors or brokers, they dismantle a certain portion of their collection by hand and send the remainder to authorized e-waste recycling companies.

The proportion diverted to the companies varies for different types of item. For instance, in Beijing, the dismantling TV dealers don’t dismantle CRT TVs anymore by themselves, and instead send them all to companies. Yet for the flat screen TVs, they dismantle more by themselves. For air conditioners, they send the ones with less than 5kg copper to companies. For refrigerators and washers, they tend to keep the one with copper engine to be dismantled by hand, and send the ones with aluminum engines to companies. Computers own the highest hand-dismantling rate, because people still reuse most removed parts of computers if it’s produced after 2000. In short, which e-waste will be hand dismantled depends largely on whether the dealers can make more money. This requires a careful evaluation of the cost of labor and sales price of the dismantled materials.

One thing I noticed is that regarding manually dismantling by the informal sector, people only physically dismantle their collection, and there’s no hazardous waste from this process. The only exception is that the coolant from refrigerators is released directly to the air. However, hand dismantling can recover a maximum amount of recycled materials. For example, this method can clearly sort out plastics, metals and other materials with little waste.

The proportion which dismantling e-waste dealers send to the companies constitutes crucial supplies for authorized e-waste recycling companies. Government subsidy only covers the dismantling cost. While it’s impossible for companies to build their own collection network, their relationship with the informal sector is more collaborative than competitive.[4] One manager from a state-owned e-waste recycling company said informal sector was very efficient in collection and the companies like them only needed to buy stuff from them, and thus they do not need to do works that they are not good at.

Although the informal sector is still very strong in China’s e-waste recycling, they have faced big economic challenges since 2012. Since China’s economy has slowed down in general, the e-waste business market is making less and less money. The market oriented e-waste recycling model is also shrinking.

What makes it worse is that there’s no room for informal e-waste sector in China’s urban planning. From the perspective of land use and urbanization, politically, the informal e-waste sector has never been considered as part of the waste management system.[5] In 2014, the municipal government of Beijing issued the list of industries which would be restricted and banned. Secondhand and e-waste recycling market and related businesses were categorized as banned.[6] Since 2014, more and more secondhand and dismantling e-waste markets, between the fifth and sixth ring roads, have been demolished. Put simply, when the market is closed, people have to look for new jobs.

The problem of Extended Producer Responsibility applied in China’s Waste Electrical and Electronic Equipment Directive is obvious.  E-waste recycling is a long chain and it involves large group of people and lots of work at each point.

The current directive only mentions the processing point and subsidizes the companies, but ignores other points such as reuse.  It neglects the existing informal sector that plays a crucial role in e-waste recycling, particularly in collection and reuse stages.

Based on my findings in Beijing, I can say that the informal sector is a well-organized network and forms a significant part in China’s e-waste collection, reuse and most part of resource recovery.  Contrary to the official discourse, pollution only happens at some point, such as when particular equipment is used in dismantling. The informal sector in e-waste recycling should not be treated as the “trouble-maker”, or be excluded out of e-waste recycling policies. Instead it should be regarded as a good partner for building future e-waste recycling systems.

[1] Interviews with scrap collectors in Beijing since 2009.

[2] Interviews with dealers for secondhand.

[3] Interviews with secondhand and dismantling dealers.

[4] Interviews with manages of three authorized e-waste recycling companies in 2016.

[6] Beijing municipal government issued its list of industries to ban and limited sectors.