Toxicity is the quality of being toxic or poisonous. I will be looking at this from the opinion of the people from Redcar. My question to them has been:

Redcar is a small coastal town in the North East of England. For one hundred years, one of their main exports has been the production of steel. Founded by Dorman Long in 1917, the steel produced was used to build structures including the Sydney Harbour Bridge, Tyne Bridge and the Auckland Harbour Bridge. In October 2015, the decision was made to turn down the furnace, and 2,200 people lost their jobs.

Throughout this toxic news article, I am going to be looking at the view of the society, which in the past few years has lost their steel industry, having a huge impact on their economy and their communities for a century. For the past two months, I have been engaging with the people that have lost their jobs as a result of the turning down of the furnace at the steel plant, which released toxic gases such as hydrocarbons, halogenated aromatic hydrocarbon as well as sulphur and nitrogen compounds into their atmosphere.

I engaged mostly with ex steel workers and on a few occasions their families and members of the general public. I did this because I wanted to aim my article at how the steel workers feel and see the wider situation. Within my questioning, I asked these participants about their feelings in relation to current health and employment statistics. I was particularly interested in life expectancy. Notably, there is a 6-7 year difference in life expectancy compared to the national average in some of the areas of Redcar that were most affected by the loss of jobs at the steel works. For me, their view was almost unanimous, instead of being concerned about the effect of the toxic gases being released in to their atmosphere; they were more concerned about the impacts of the losing an industry that had been in Redcar and its communities for a century. It is not the case that the people I spoke to do not care about the environment. However, it is clear that the steel industry has been very influential in building Redcar’s communal sense of identity.

I was interested in the perspectives of Redcar residents, and the role that toxicity plays within their local society. Often, globalisation became the main topic of conversation. Nayef and Al-Rodhan (2006) define globalisation as ‘a process that encompasses the causes, course, and consequences of transnational and transcultural integration of human and non-human activities’. So in simple terms, Globalisation is about countries, communities, businesses and people interacting with each other on a cultural, economic, environmental, political, and technological level.

Currently, the view of people I spoke with see is that the impact of globalisation is having a negative effect, because they feel that the global market has taken them further away from the developing global community and economy than they have ever been.

One of the real toxic impacts of globalisation has been the loss of jobs. The end of steel production has created a 16.2% increase in unemployment for the year of 2016 (Briefing paper. Number 7534. March, 16, 2016). Many believe this has helped to create wider impacts across three main areas of this community.

This also fostered a sense of community, so that working in the steel industry was not seen as just a job but as a way of life, with regular social events, clubs and even a gym for the employees.

This was an industry that not only fed a towns need for a purpose, but it also created aspirations for generations of people, making job losses very visible. The steel plant employed entire families. Two or three generations could be working under the same roof at the same time. This also fostered a sense of community, so that working in the steel industry was not seen as just a job but as a way of life, with regular social events, clubs and even a gym for the employees. In this sense, it not only provided jobs but aspirations for the local area. It brought people to the area, creating cultural diversity to the area, rather than it being a closed off community, as is the case for many small northern towns. The steel plant was putting the small seaside town of Redcar on the map, due to the production of steel for some of its biggest and most well-known steel structures across the world.

The sizable loss in jobs immediately had knock on effects, notably impacting that economy of the area, especially visible in Redcar town centre. 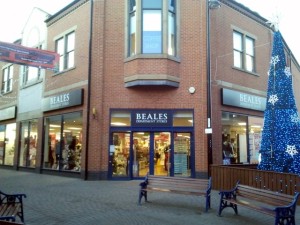 Over a short period of time, Marks and Spencer’s and Beales department store pulled out from the high street. This left very noticeable and thus far unfillable gaps. So with people having markedly less disposable income, major companies pulled out of the high street, which has meant two things. Firstly, people have to go elsewhere to spend their money outside of Redcar. Secondly, this created significant jobs loss, because these major companies were also large employers in the local area.

Young people have been educated and nurtured by these communities, but there are fewer opportunities arising so these young people are currently having to leave their communities to find work in other areas of the country.

Finally, for those I have spoken with, the main toxic impact of globalisation has been the loss of their community. Most notably for younger people, a lack of employment has meant they need to go elsewhere, which will have long-term consequences. Young people have been educated and nurtured by these communities, but there are fewer opportunities arising so these young people are currently having to leave their communities to find work in other areas of the country. Which on one hand is great, young people should have aspirations and want to achieve great things, but because of the lack of infrastructure currently in this area, there is nothing for these young people to come back to Redcar for. This means there is the possibility of a huge generation gap appearing. For young people especially, there are few opportunities to redefine themselves and embrace globalisation.

So in conclusion, what is the real toxicity within this small seaside town? Was it the steel plant polluting the atmosphere and damaging the wildlife and local environment? Is it the impact of globalisation and the three areas that I have looked at above; or finally could the real toxicity be a society that is unwilling to embrace change and see this opportunity to grow and develop as a society where its main industries aren’t based around pollution?

What I do know, is that every person I spoke to has a passion and is proud to say they are from Redcar.

I personally do not have a definite answer to this question. What I do know, is that every person I spoke to has a passion and is proud to say they are from Redcar. So let’s hope that whatever the real toxicity is in this area, they will find a way to overcome it and grow away from it.

Archangel12/Flickr, (2010), The steelworks at Redcar are facing a bleak future unless help comes soon. [ONLINE]. Available at: http://www.thenews.coop/99011/news/co-operatives/can-co-op-movement-help-save-uk-steel-industry/ [Accessed 19 January 2017].