What you do with your money is your business, but when you begin to spend your money in my territory, that disrupts and destroys our way of life, our civilization, then that becomes my business. My investors, the water, the air, the medicine of the plants, the four legged, the buffalo, have invested in our civilization for thousands and thousands of years. Fundamentally, I think your nation is rich in protecting the environment, and you need to practice the ethical reality where the tar sands are.

Our modern society depends on exploitation of natural resources offered to us by our finite planet. Every day we excavate minerals, oil, coal and other reserves, from Alberta to Tibet, from Siberia to Tasmania, and in many other places around the world. This has caused devastating effects upon the environment and people’s health.

In uncountable places where mining activities occur, there is neither blue sky nor white clouds, the air is filled with dust and toxic gas, the land and water are contaminated with hazardous pollutants, and people get sick or even become ecological refugees.

However, exploration and excavation is just the first step of our unlimited exploitation of the Earth. The excavated natural resources are then transported to gigantic modern industrial complexes or small scale factories. In these places, production is accompanied by creation of waste gas, waste water or solid waste; and industrial pollution occurs again. But through this process, the raw materials transform into all kinds of products that we depend on¾ oil and coal to provide energy, steel to build skyscrapers and cars, and plastic to make computers, keyboards, packages and bottles… Yet, like leaves falling from trees in autumn, nothing lasts for ever. Ultimately, fossil fuels are burned and emit more greenhouse gases that contribute to climate change; old buildings are abandoned or demolished, cars become scrap metal, and packages and bottles are cast away. Some are recycled and reused; others become wastes that are dumped, buried, or incinerated and returned back to the Earth, gradually turning it into a wasteland.

Moreover, in both processes of production and consumption, the exploitation of natural resources, particularly fossil fuels, has been a great contributor to global warming and climate change. Burning fossil fuels, including coal, natural gas and oil, for energy, transportation and industry is a major source of CO2 emission. During their excavation process, both coal mining and oil fracking produce methane, which is less prevalent in the atmosphere than CO2, but 20 times as powerful as a greenhouse gas. Studying 14 of the largest energy projects planned around the world, from “massive expansion of coal mining in China, to large-scale expansion of coal exports from Australia, the US and Indonesia, to the development of risky unconventional sources of oil in the tar sands of Canada, in the Arctic, in the ocean off the coast of Brazil, in Iraq, in the Gulf of Mexico and in Kazakhstan, and to gas production in Africa and the Caspian Sea”, a report Point of No Return published by Greenpeace in 2013 warns that if the 14 planned projects were all to go ahead, they “would raise global CO2 emissions from fossil fuels by 20% and keep the world on a path towards 5 to 6°C of warming.” If this were to happen, large parts of the planet Earth would become uninhabitable. 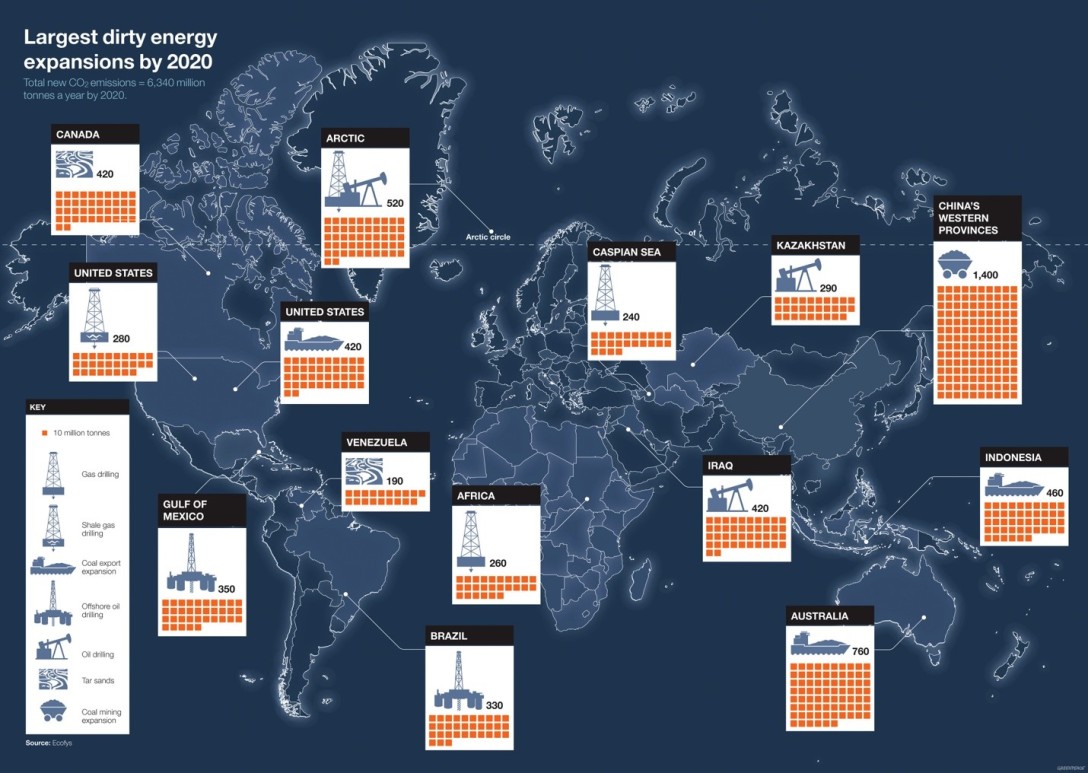 Human excavation and usage of natural recourses, especially non-renewable ones such as oil, coal, and minerals, is a vicious cycle of unlimited and endless exploitation. In each stage of this cycle, as long as the profit seeking logic of business strengthens, and governments prioritize economic growth while neglecting, ignoring or even manipulating the idea of sustainable development, it is the Earth that suffers. It is the most vulnerable, defenseless and underprivileged people – miners, aboriginal peoples, villagers, town dwellers, even polar bears and Antarctic penguins – that become the most victimized in the process and bear the most of the toxic cost.

In this issue of Toxic News, four authors address the toxic cycle involving natural resources and their devastating impact upon the environment and people’s lives in different geographical regions. In “Coal Mining, Ecological and Environmental Disasters in China”, Zhang Yulin uses statistics to illustrate the severe ecological disasters caused by coal mining in Shanxi Province and villagers’ suffering of living in fear in houses on top of hollowed and sinking land that might collapse at any minute. On the other side of the Earth, in La Oroya in Peru, social and economic crisis have been accompanying the opening and closing of lead factories. In “Lead, Politics and Community”, Pamela Neumann illustrates how the Peruvian town was transformed from a small community to a major metal factory that resulted in dangerously high levels of lead and sulfur dioxide exposure among its inhabitants, particularly children. She presents the dilemma of living on contaminated land and the fear of losing place-identity if the inhabitants were to move away. In “Into a Frozen Inferno: Personal and Historical Trajectories in Monchegorsk”, Andy Bruno draws upon his new book ‘The Nature of Soviet Power’, and tells his personal experience of travelling and researching the sordid history of industrial pollution on the Kola Peninsula in the post-Soviet north. The fourth article, “Toxic Canals” by Simona Grano, takes us to southern Europe, to Venice, the picturesque canal city, not to understand its grand history, culture and civilization, but its comparatively invisible toxic canals surrounded by chemical plants with flare towers standing tall.

In this issue, we also have articles relating to issues of climate change, green labelling, electronic waste, and nuclear testing. In “Climate Change, Eco-Labelling, Corporate and Consumer Responsibility”, India Holme leads us to a journey starting from the (non)recycling of pizza boxes and the sustainability life cycle of a plastic water bottle to our daily consumption, its relation to climate change and its impact upon the global south, and to government regulation, business obligation of informative labeling, and consumer responsibility. Yvan Schulz makes thoughtful analysis in “Toxic E-Waste, Oriented Science” about electronic waste recycle factories in southern China and the limit of science in understanding environmental pollution and toxicity. Lastly but by no means least, in “Grapple Slings and Moonshine: Conversations with the men who tested atomic weapons on Christmas Island”, Becky Alexis-Martin draws upon her ongoing research about the lives and experiences of the families of British nuclear test veterans. She tells vivid stories of two soldiers who travelled far from their families and homes to test nuclear bombs during the Cold War.