The workshop provided a platform to discuss key issues surrounding the competing claims of expertise, agency and environmental knowledge. We explored debates about expertise in relation to pollution and health, environmental justice, public participation, and social movements, drawing on examples in the United States, China, and Europe. In an era where we are increasingly facing ‘wicked’ environmental problems (Rittel 1973), it is more important than ever to understand whose expertise is valued and which information is discarded. Whether concerning the impacts of environmental disasters, or the slower brutality of climate change, competing claims are often made, reinforced, unmade and hidden from public and policy view. This workshop was an opportunity to share ideas and discuss ongoing research related to these themes.

The first day involved a roundtable discussion around the theme of ‘Pollution, Health & Global Governance’, followed by a film screening of the documentary Warriors of Quigang. Barbara Allen began the discussion with a fascinating talk about recent research she has been doing about the H1N1 Virus. Barbara discussed how the framing of a techno-scientific issue is of key importance, with the framing of an issue effecting ‘who counts’ and ‘who doesn’t’. She noted how the H1N1 Virus transformed from a ‘human tragedy’ in Asia to a ‘biosecurity threat’ in the West. Anna Lora-Wainwright  reflected on her long-term ethnographic research in polluted landscapes in China, suggesting that citizen science can work as a potential resource for science and environmental justice, but cautioning that there are also potential pitfalls. Mao Da drew upon his environmental justice research in China, emphasising the importance of collaboration between NGOs and local communities, though pointed to the limitations that Chinese laws have put on foreign environmental NGOs especially. Gordon Walker spoke around the issues of displacement, ‘toxic imperialism’ and environmental blackmail. Reflecting on the limitations of a global perspective on environmental governance, he pointed out that ‘even between England and Scotland we had different regulations’. Scott Frickel spoke about ‘epistemic inequality’ as the flip-side of ‘knowledge justice’. He related this to a really interesting research project he is working on that tracks the location of historical industrial sites in urban centres, pointing to the long-term and often invisible legacies of ‘everyday’ industry.

Shaun Breslin kicked off the discussion, as an expert on China and the global political economy, provocatively questioning the role and value of global governance in the context of environmental health challenges at different spatial and political scales. Leon Sealey-Huggins further animated the discussion, describing the sense of ambivalence throughout the talks that he had noticed around the concept of global governance. He pointed to the number of times that local knowledge was evoked in our discussions, and how this complicates the idea of global environmental governance. 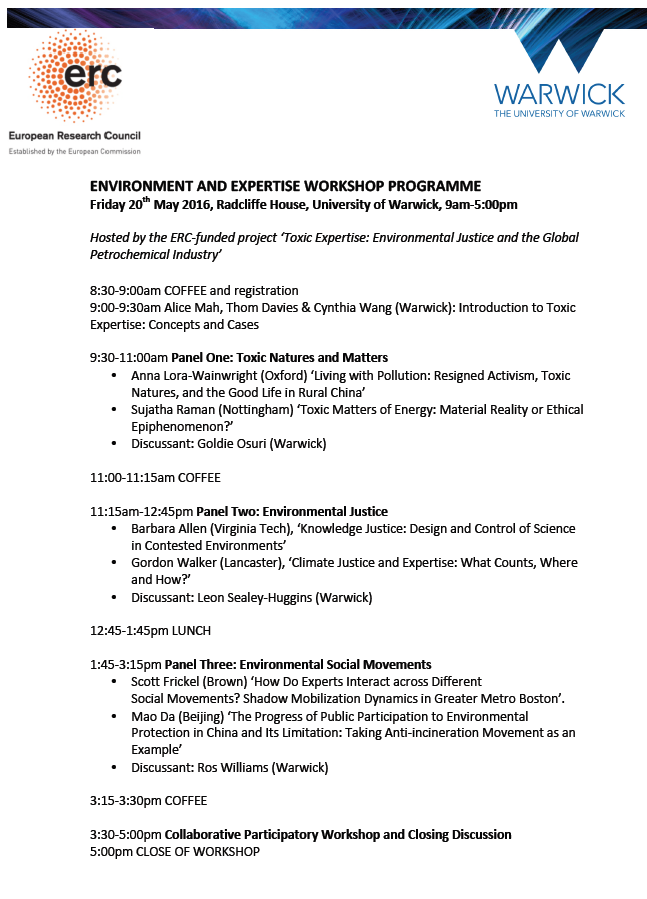 Our Toxic Expertise workshop the next day involved presentations and lightning talks from the participants, which provided the space for some really interesting conversations and collaborative knowledge exchange. The Toxic Expertise team started off by presenting some initial findings from research we have been doing in Europe, the USA and China. Presenting my pilot research from Louisiana’s ‘Cancer Alley’ was a little daunting at first, given that Scott Frickel and Barbara Allen are both experts in the area, but discussing the research with them proved very useful. Sujatha Raman gave an engaging presentation about her work on antimicrobial resistance. I was unaware that microbes were so heavily involved in industry, and it was fascinating to hear about the consequent environmental dimensions and expertise dynamics relating to antibiotic resistance. Barbara Allen talked about an ongoing environmental justice research project she is working on in a polluted area of Étang de Berre in Southern France. Fitting with theme of the workshop, she also gave a critical discussion of what exactly counts as ‘justice’ and what counts as ‘knowledge’.

Gordon Walker’s paper brought some STS thinking about ‘publics’ into writing about environmental justice. He discussed the ‘slipperiness’ of the term ‘public’, instead suggesting that there are multiple publics, each with their own ‘imaginary laypersons’. Scott Frickel talked about his fascinating and ambitious collaborative project to map the network of expertise involved with environmental organisations in Boston. Using snowball sampling his research team is locating ‘visible experts’ and also the ‘shadow experts’ who help environmental NGOs. Reflecting on the politics that surrounds being an expert for an environmental organisation, his unearthing of ‘shadow experts’ is particularly interesting. Mao Da’s presentation gave a detailed picture of public participation in environmental law in China. He talked about how recent ‘revolutionary’ changes in environmental law in China mean that, for the first time information disclosure is possible. However, he outlined several tactics used by the government to withhold, delay or otherwise hinder the disclosure of environmental information in China. Goldie Osuri acted as a discussant after the papers and asked what will be the longue durée of toxicity, suggesting it would be interesting to think about how a person living during the industrial revolution of the 19th Century would make of the global toxic challenges we face today. Likewise Ros Williams skilfully connected the papers together during her reflections as discussant. The day ended with lightning talks from Nerea Calvillo about her research in Madrid, and Reiko Shindo’s reflections from her work in Fukushima. The day culminated with a group discussion and ideas for an upcoming Special Issue which is under review.

There were clear common themes that emerged in our presentations and throughout our conversations. These included the importance of researching the invisibility and visibility of toxicity, as well as the necessity of researching ‘hard to reach’, unseen or hidden types of experts. The idea of scale was brought up several times during the two day event as well as the ways we can represent toxicity and toxic knowledge. Power was also a key theme that emerged, and the importance of revealing the power relations that determine both the location of toxic threats and also the contested understandings of toxicity.

I think the first annual Toxic Expertise workshop was a real success. It was a rare opportunity to bring together critical thinkers from a range of academic backgrounds, all of whom focus on the environment, pollution and expertise in different ways. Sharing work-in-progress and hearing about some of the exciting research that has been conducted by these scholars was really inspiring. I look forward to continuing a dialogue with this group, we well as many other scholars, as the Toxic Expertise project progresses.

Many thanks to all participants for making the first annual Toxic Expertise workshop a success and thank you to India Holme for her hard work and organization.